I’m kind of a mess. I think I hide it well, but Danny’s onto me. We’re constantly laughing at my klutzy ways – bumping into walls, hurting myself on a regular basis and always getting myself into predicaments. Like last night – we’re lying in bed when all of a sudden we hear tons of water running. Danny jumps out of bed thinking a pipe burst in the front yard so he’s prepared to turn our home’s water off. A few minutes later he comes back in the house, “hey love, when you were watering the plants today is there maybe a chance you forgot to turn the hose off when you were done?” me, “oh sh*t.” Yeah, the hose had a sprayer on it so I forgot about the water, left it on and enough pressure built up that the hose burst tonight. Whoops. (No joke, I had just finished writing this post when Danny came into the bedroom and goes – you may want to add this one as an example for tomorrow.)

Then, there are the totally random things that seem to happen only to me – not him. Like what you ask? For example, while we were waiting to board our flight to Las Vegas, Ting was watching YouTube videos to learn more about craps (clearly he picked the wrong tutorial) and I was minding my own business reading Bossypants (hilarious) when all of a sudden I notice a huge spider inches from my face. I freaked out. My book goes up and the two people next to me thought I was having a seizure since I was smacking at the air and shaking my head frantically. Seriously, the only spider anyone has seen at an airport decided to repel right down to me.

So on Saturday I was working on a bunch of crafty things for Colby’s upcoming bridal shower. I bought a new paper cuter and asked Ting to help me put the blades on… “I’m working on something, can I have a few minutes?” he says. Sure. Except I get impatient. So I open the package and try to do it myself. Within seconds I’ve sliced open my finger and look down to see blood all over my leg and freak. I immediately start screaming at Ting to help before I get blood all over the new couch. He just laughed (lovingly) since it was not shocking that this had just happened. Yes, I’m totally okay. But it was a very dramatic moment and just another example of how I’m a mess.

No joke, at least once a day Danny asks me… “seriously??? how’d you manage to do that?”

My loving husband insisted on taking a photo of me and my bandage before I even calmed down. Rude. 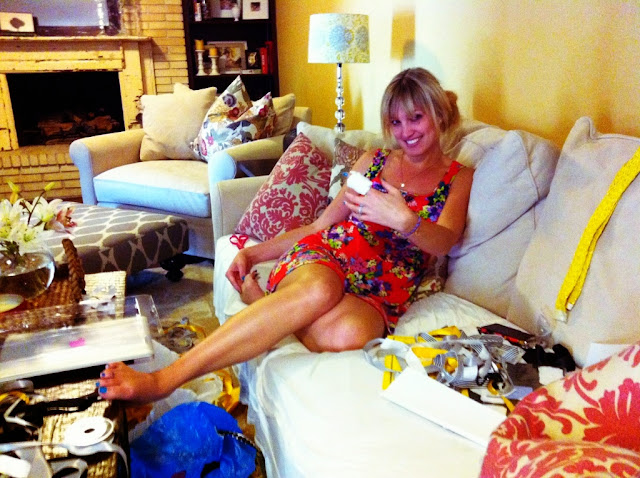 Blood, sweat and tears never rang so true. It hit 111degrees this weekend and yes, I cried over the cut.