…”dance is back, bigger than it’s been since the last days of disco.”
After years of being relegated to the margins, the American dance-music scene is reaching critical mass.
The current cover story in Spin magazine dives into the American electronica revolution. There’s no denying that electronica/dance music has made its way to the U.S. and it is here to stay. Both Danny and I have always loved house music. I remember him playing Daft Punk and “Shiny Disco Balls” on repeat and my musical taste gravitating towards electronica after living in Europe for six months.
However our love for dance beats was solidified on January 1, 2006. Danny and I had just flown from Fiji to Sydney, Australia to visit Shmer and Dan. “For New Year’s Day we bought tickets for Field Day,” they told us. “Okay,” we said. Looking back we were two deer in headlights at the dance festival that forever changed us. Along with tens of thousands of other people we danced our hearts out for 12 hours in the sunshine and then in a torrential downpour to Sneaky Sound System’s “Pictures.” Shmer told me to just lip “watermellon, watermellon…” if I didn’t know the words. It is a day we will never forget and from that point forward we craved the beat. We wanted more. Dan sent us back to the U.S. with a list of DJ names and we couldn’t wait to expand our music library. Top 100 American music would no longer satisfy us. We slowly started to immerse ourselves into the electronica genre. We learned about big artists, small artists, the different types of dance music and started attending stateside music festivals – Coachella, Ultra Music Festival in Miami, HARD Festival in LA along with an underground rave or two.
Over the past few years, its been fun to watch (and listen) to electronica creep its way into mainstream American music and into our friend’s playlists. Together with friends, we’ve bounced, danced and sang along as some of the world’s top electronica artists have deejayed live in front of thousands of people. The rush of adrenaline and feeling you get is indescribable.
Sure, you think you’re not into “techno” because you don’t know the names of DJs, but if you turn on the radio right now there’s a good chance the song you’re bobbing and singing along to has been heavily influenced by the techno beat… it’s becoming the norm. It’s “electro-pop” and many mainstream artists are on-board and producing albums heavily influenced by techno. Why? For one, the numbers don’t lie – people love it and want more (see the numbers in the article below). And despite the stereotypes associated with the “rave culture” (and the people who enjoy it) there’s no denying this type of music puts a smile on your face and you can’t help but dance. It makes you want to move. It’s happy “come-as-you-are and dance-as-you-like” music.
Still skeptical? We dare you try not to move and dance when the beat drops. Get on board, it’s a revolution.
read the cover story here or click the image below. 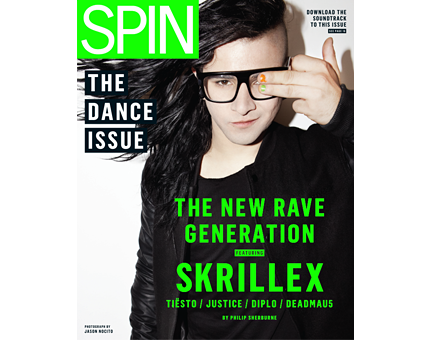 who’s currently on repeat on your iPod? if you ever wanna talk tunes, i’m all ears.