this photo pretty much sums it all up… 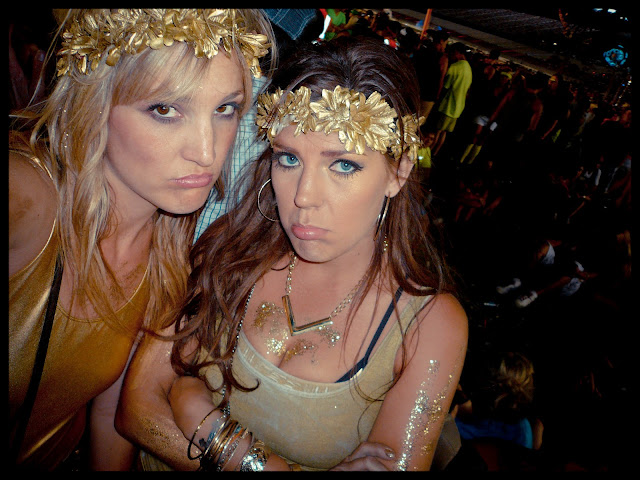 our spontaneous, should-have-been-epic 18 hours in las vegas didn’t go exactly as planned (post here).
it went something like this…
6:20 p.m. // Land in vegas, take a cab to the strip, race to cover ourselves in glitter.
8 p.m. // Cab it to another hotel. miss the party bus. beg our cab driver to take us to the festival for $80.
10 p.m. // Finally arrive at EDC after a 2-hour cab ride. meet up with Colby. yay! we’re all together.
11 p.m. // After another hour in the security line we’re IN. three hours after leaving the hotel.
11:15 p.m. // Grab a beer, feel out the lay of the land see a tiny bit of Bassnectar’s set.
Midnight // Finally getting into the groove of the night, watching Calvin Harris’ set, head to Rusko – not on.
12:45 a.m. // EDC “temporarily” shuts down the festival for safety reasons due to strong winds.
1 a.m. // about a 100,000 people are moved to the grass & grandstands to see how the night will play out.
2:30 a.m. // We realize it’s officially over and decide to leave to try and salvage the night.
2:45 a.m. // Beg every limo, party bus & shuttle driver to take us back to the strip. Find a bus, pile in.
4:30 a.m. // Another 2 hours later, we arrive back on the strip; walk back to our hotel.
5 a.m. // Grab a beer and dance at the hotel “club” with all the other EDCers.
6:30 a.m. // Cab it to the airport in all our EDC apparel and no luggage to get an early flight home.
10:45 a.m. // Arrive home, shower, de-glitter and pass out.
end of story.
so, yeah. we basically danced for 45-minutes before it closed down. lots of time, money & effort lost. oh well, i guess. you win some, you lose some – it was las vegas after all. at least we made the best of it and we were in it together and it was really fun while it lasted – we were just expecting another 10+ hours of good times and actually seeing some of the best DJs ever. i was genuinely shocked by how enormous EDC is. the set-up is massive and it really is filled with tons of awesome art, stages and rides. it was a for-real grown-up candyland.
oh, and some of you may recall that this isn’t the first time that colby & i have been at an electronica festival event that had us escorted to the grandstands before a complete shutdown. yup, in august 2009, me & colby, jake & danny, alex & jared all went to HARD Fest LA and it ended before it even began (here) due to rowdy crowds and an un-fit arena setting (where the night took us ended up being totally awesome). so at EDC when colbs and i heard the “please move to the grandstands,” we looked at each other like, “you’ve got to be kidding me right now. this cannot be happening again.” we agreed that we’re not destined for electronica music festivals.
on a happy note, our gold outfits were a major hit and there’s a good chance we’ll be in next year’s EDC promo video – which is hilarious and ironic considering we were “faking” the fun & dancing during the shut-down.
the few snapshots i did take… 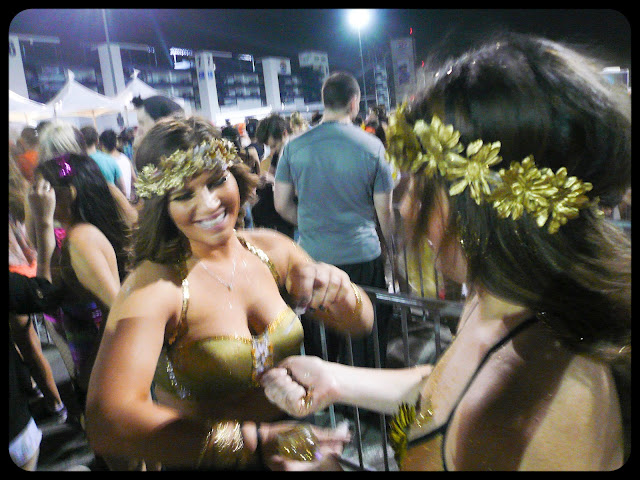 {getting glued & glittered in line} 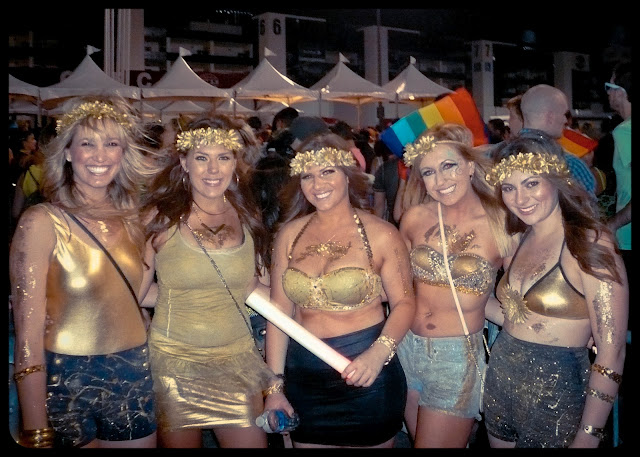 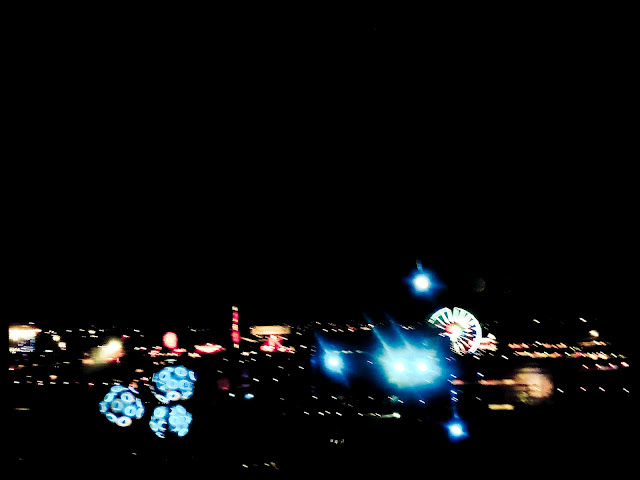 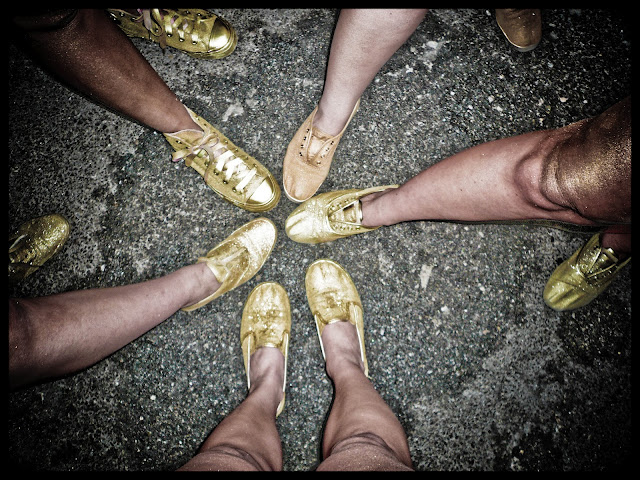 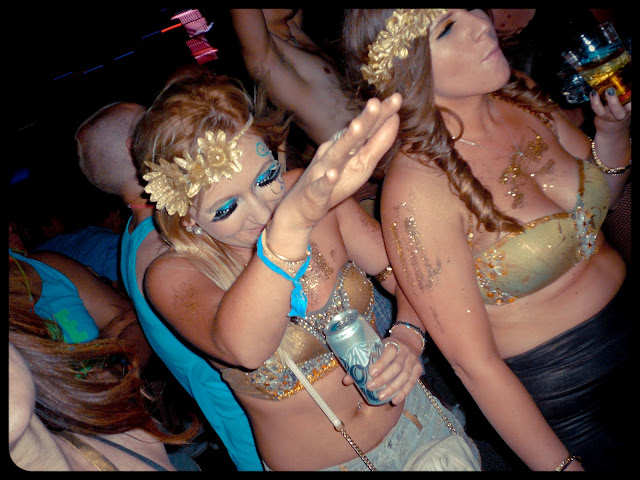 {victoria & rachel gettin’ their groove on} 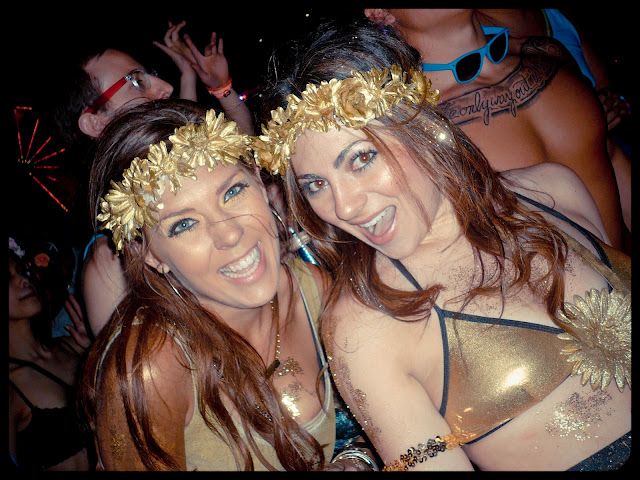 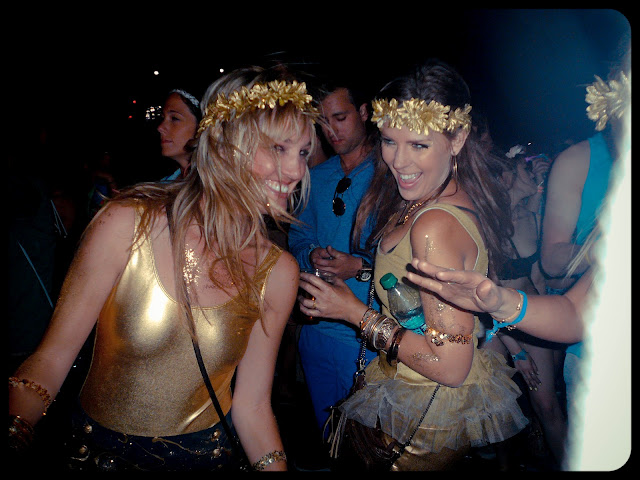 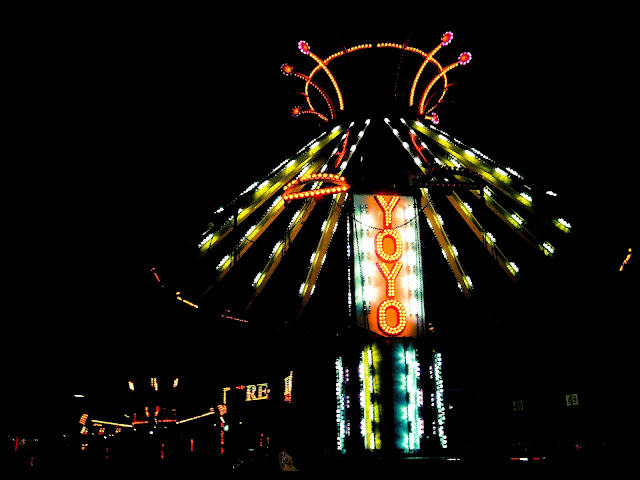 {there’s a full blown carnival inside… tons of rides. but sadly, all shut down due to wind} 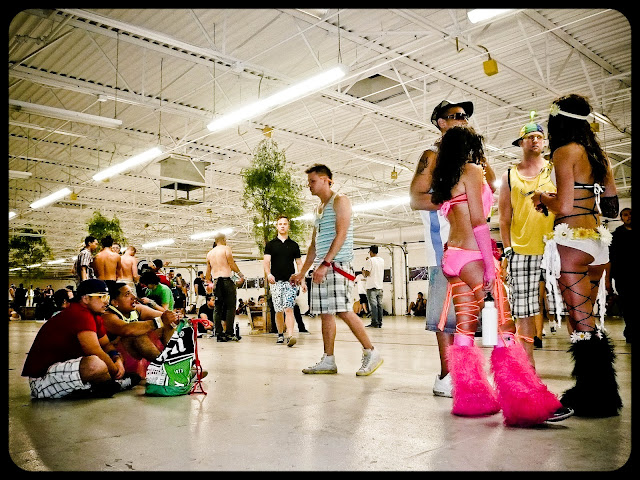 {in one of the cool down zones. some typical EDC garb} 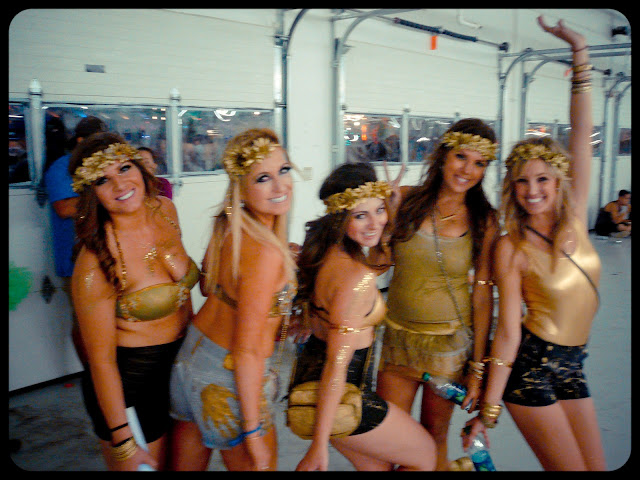 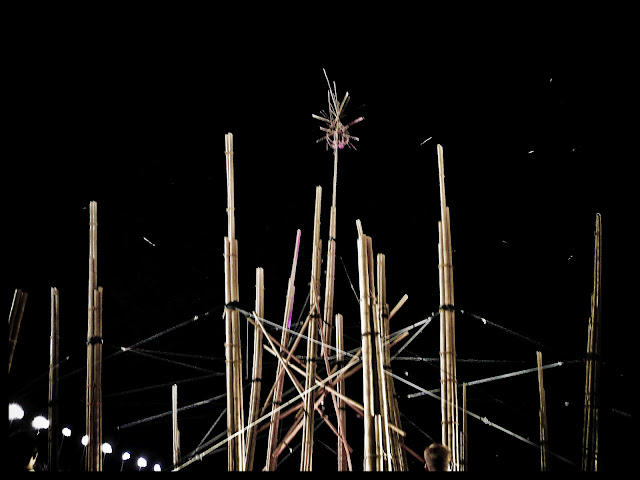 {i was surprised by how much art there was. very cool stuff.} 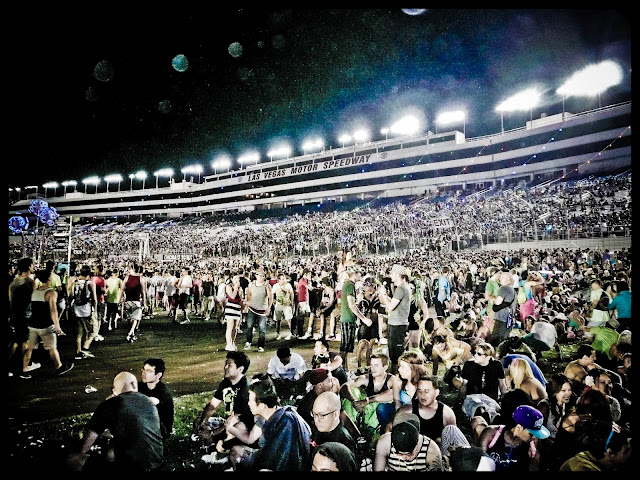 {as the crowds were getting herded into the grandstand & grass area} 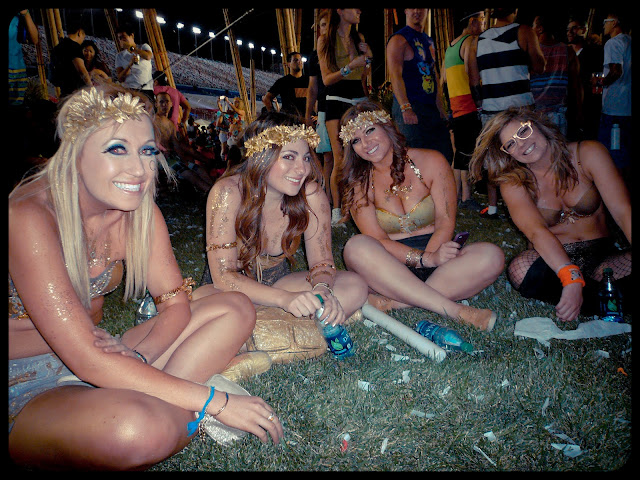 {camping out by the sticks waiting for the verdict…} 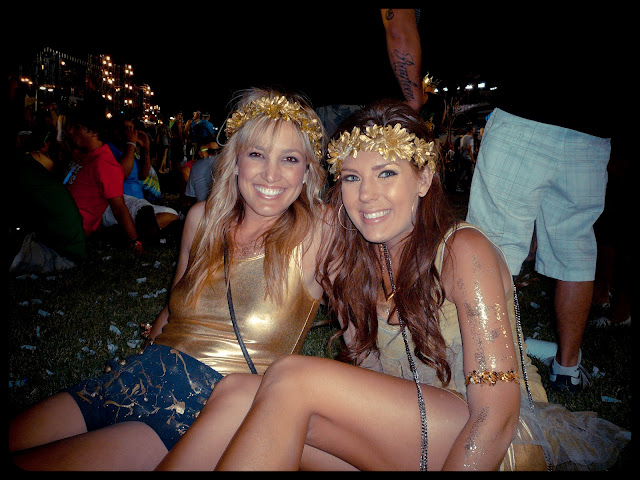 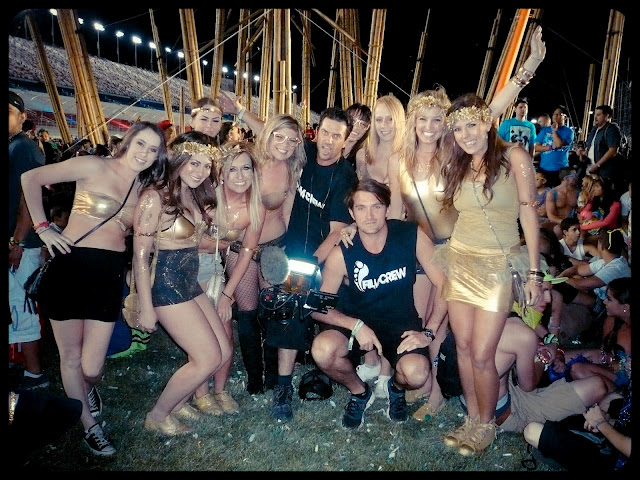 {with the awesome EDC film crew} 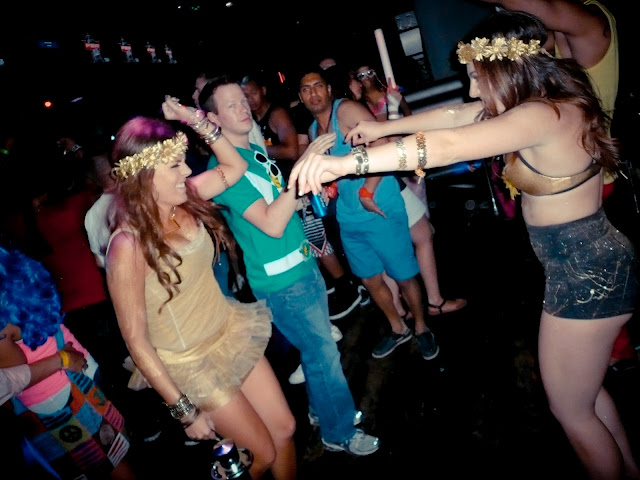 {taking the party to Planet Hollywood. trying to salvage the night with a dance party} 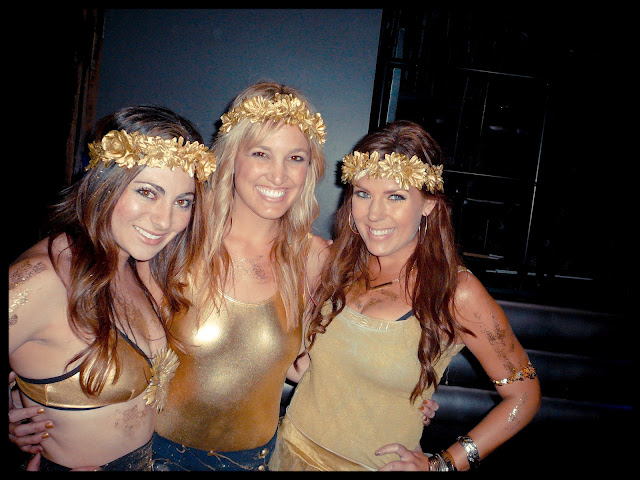