we’re destined to be cat people. the universe has been pretty blunt about this.

rewind to july 2005 – the day danny got the keys to the old, old house (the 1801) – when we found overflowing bowls of cat food on the back porch plus three cats with collars & tags adorned with our new address. yup, we had officially acquired cats with the house. so for three years, we took care of princess, alley cat & garfield. our names for them.

fast forward to our most recent moving day… it was the loitering pigeons that tipped us off. danny went to the side of our new home and sure enough – a big old bag of cat chow and a bowl of water. déjà vu – cats. after some asking around, it’s clear that these three – maybe four – felines are ours to feed.

we’re totally okay with it. we don’t mind cats at all. in fact, danny really likes cats. thinks they’re “so smart.” and hunter, well, he and the felines are getting aquainted. thanks to the bunches of windows and french doors, they’re had a lot of face time and one actual meeting last weekend. hunter decided to bolt out the front door to chase the cat, so danny darted out to chase hunter, i was yelling at danny that it was okay, and poor vicky was in the wrong place at the wrong time and got body checked by danny and almost flew off the front stoop. it was quite the scene. the new crazy neighbors. we must have looked like a comic strip… dog chasing cat. owner chasing dog. wife chasing owner. innocent bistander getting knocked out of the way – pow!

so yeah. this one particular cat in the photos – who’s all white with a black mask just like huntie – is super friendly and really wants to just hang out with us. each time you open the front door i think she’s going to sprint in. this morning we named her felicia. felicia the feline.

the other cats are grey… apparently a mother/daughter duo. the only problem with the cats are the pigeons. and since the “deal” danny tried to make with the cats – for them to keep the pigeons away in return for their chow – isn’t working (despite the conversation he had with them that i heard from the living room – true story), danny’s new mission in life is to get rid of the pigeons by only feeding the felines at night – since apparently pigeons don’t come out at night… this is all news to me, but apparently ting’s been reading up on pigeons and is now an expert. cool. 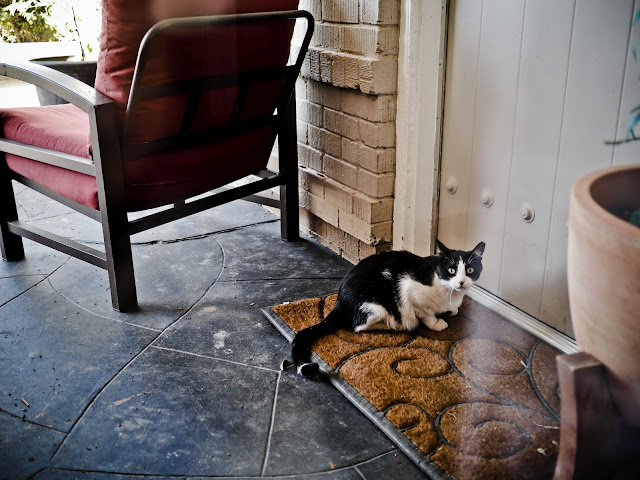 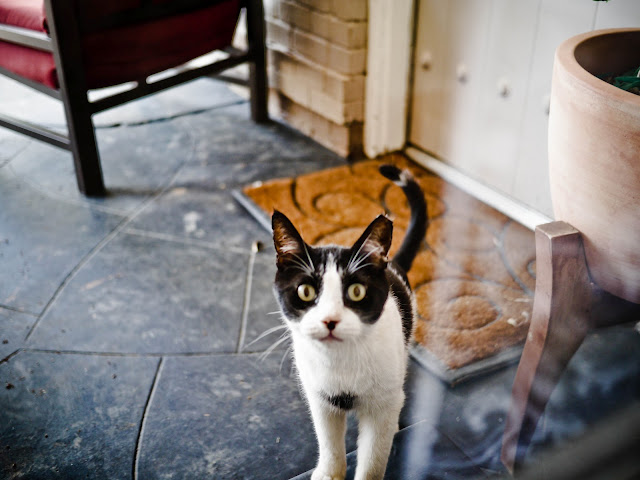 very friendly. she’d love to just come in and hang out for some warm milk if we’d let her. 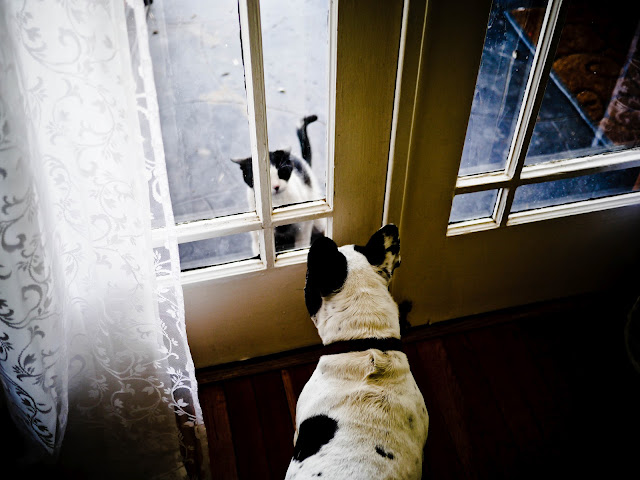 this is what most morning’s look like. and then all the hair stands up on huntie’s neck and felicia hisses.