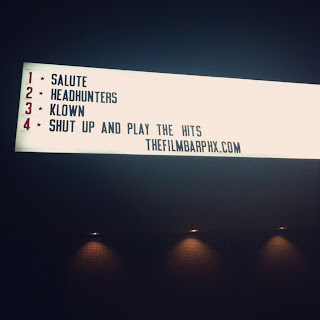 last friday night we met up with friends at FilmBar, one of downtown phoenix’s many gems, for the 10 p.m. showing of “Shut Up and Play the Hits,” a documentary about the final days of legendary band LCD Soundsystem.
due to popular demand, the limited release came back to phoenix for  just three more showings. i’m glad we were in town to catch one. here’s a list of the remaining cities and showtimes. if you can, go see this film.
we all loved it. it was a neat to have an inside look at super stardom and the raw, mixed emotions of it all coming to an end – by choice. i can’t even imagine what it would feel like to stand on stage at madison square garden with thousands of people singing your songs and rocking out to your music. holy adrenaline. holy amazing.
p.s. if you’re phoenix and haven’t been to FilmBar yet, goooooo already.