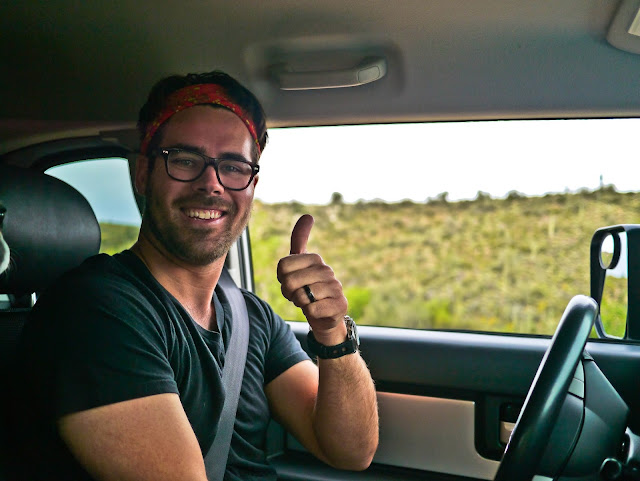 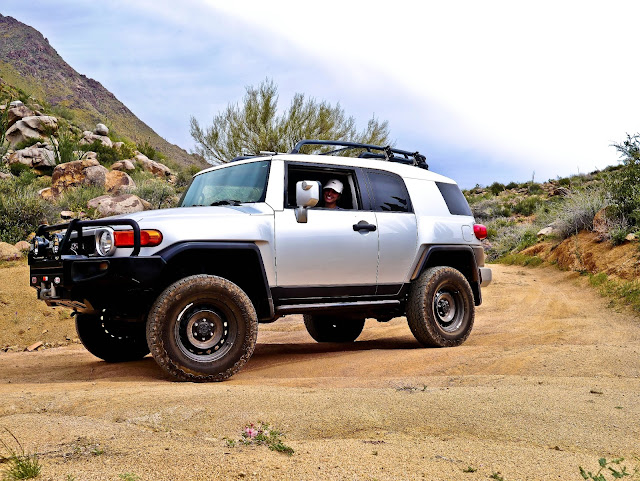 like most girls who can appreciate all kinds of different fashion styles, ting is a guy who’s hobbies run the gamut: a little prep, a little metro, a little granola. a born and bred desert kid, he’s currently channeling his inner outdoorsy man (have you noticed the Chacos lately?), which means i’m getting roped into “adventures.”
this was the case last saturday morning. i had a nice day planned for myself – laying out, sewing, running a few coachella errands, wrapping gifts – but that was all quickly replaced by four-wheeling.
marriage = compromise. marriage = compromise. marriage = compromise. i said over & over again in my head.
ugh.
danny now owns both a Mini Cooper with neon green accents and an FJ Cruiser Tank (could they be more polar opposite?), and he was excited to make the first FJ four-wheeling adventure a family affair. “you pumped?” he asks me as the alarm goes off at 7:45am on a saturday morning. “yeah!” i exclaimed.
what we learned:
1. being the passenger of an off-roading excursion is like watching someone play a video game for four hours. fun for the kid with the #1 controller, terrible for player #2. especially when you can feel every jolt and bang.
2. a dog and off-roading isn’t a winning combination. i was in charge of holding and controlling our 30-pound fur ball who has 20 sharp toenails.
3. four-wheeling is now officially in the category of ting’s “solo” hobbies. wife not included.
yeah, about two hours into the rocky excursion i couldn’t take it any more. i was so done. i made him stop the car. convinced i was a) going to throw up and b) turn black and blue from all the thrashing around, i started to cry. for real tears.
“do you want me to turn around?” asked my very astute husband. “no, it’s fine. how much longer do we have?” i whimper. “well, we have gone 9.2 miles and this trail is 31 miles.”
YES. yes, that is exactly what we’re going to do. we are going to turn around. this isn’t even a conversation.
the way back was even rockier (even he admitted it), but danny forced me to drive for a little while and that was much better. it’s far better to be in control and not simply be at the mercy of the next giant boulder that would thrash me into the plastic interior.
so that was our saturday morning! i swear i tried be positive. i told him i’d hike the grand canyon 12 more times before i’d be excited to do that again. and those of you who know the infamous “condor” story from Australia, yeah, this four-wheeling business is up in the ranks of that three day adventure from hell that danny picked for us. 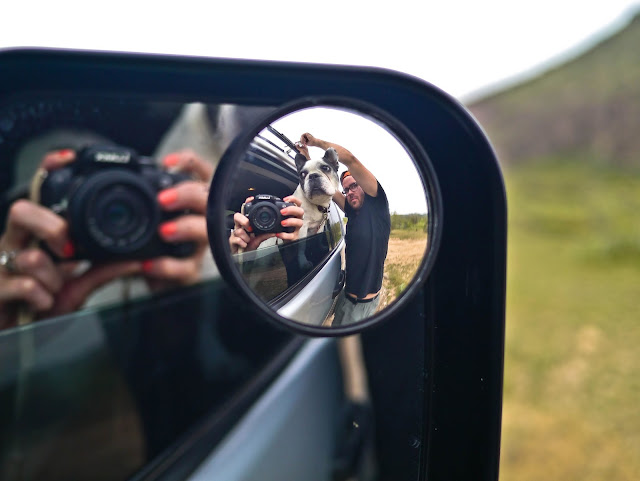 huntie checkin’ out dad who was checking’ the roof rack. 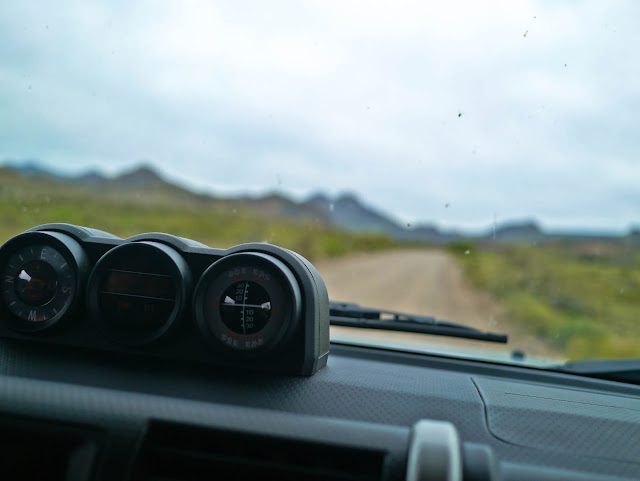 oh you know, to show you how tilted your car is. because that’s casual. 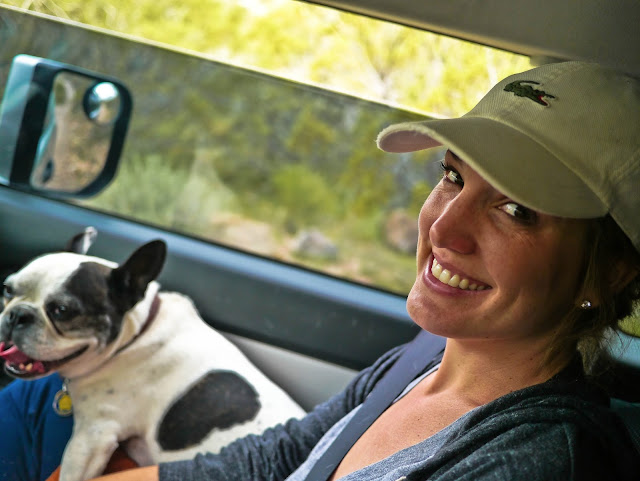 me. trying to be positive. huntie loving his life. not sure if i still have the top layer of skin on my legs. 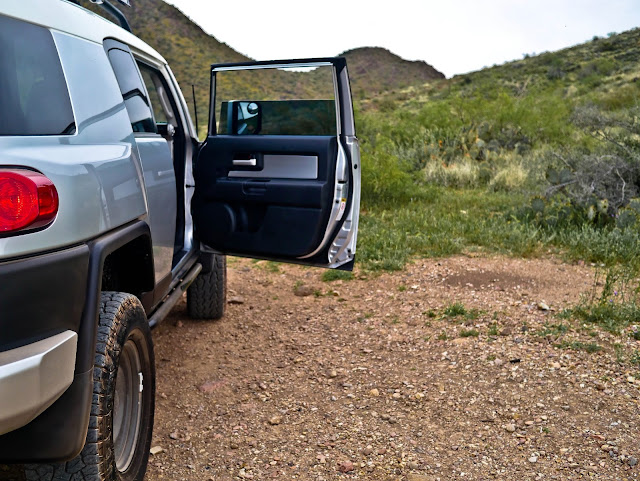 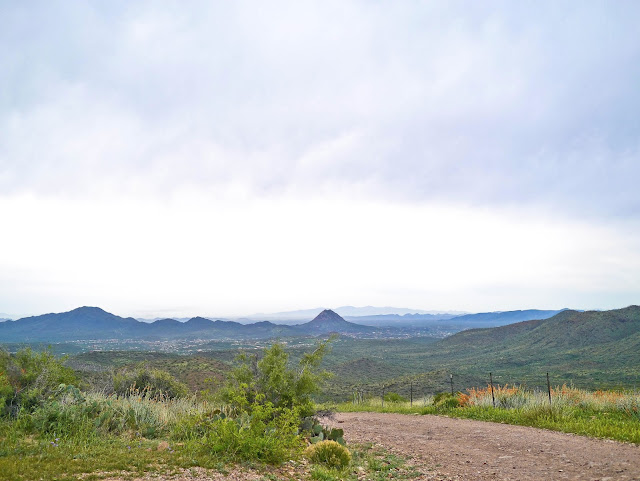 danny kept telling me to relax and take in the beauty. i love you, d, but it wasn’t enough. 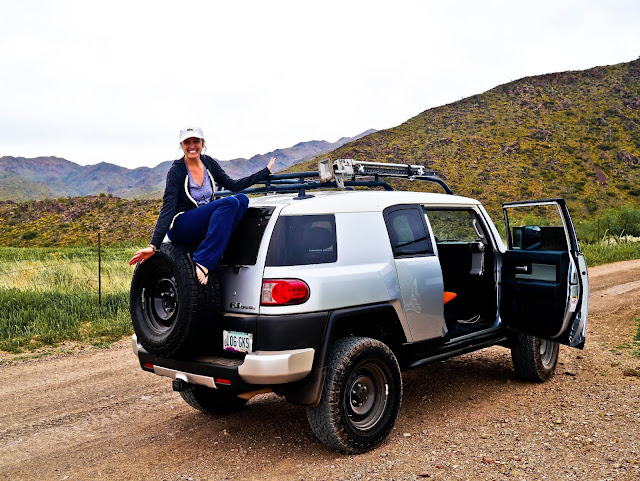 see — you can’t say i wasn’t trying to love this for him. 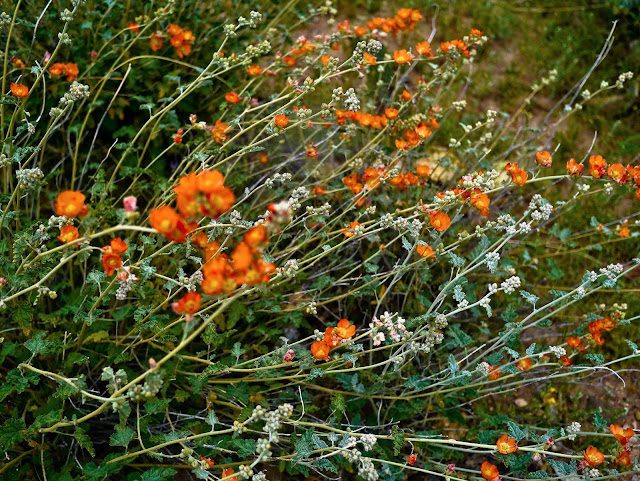 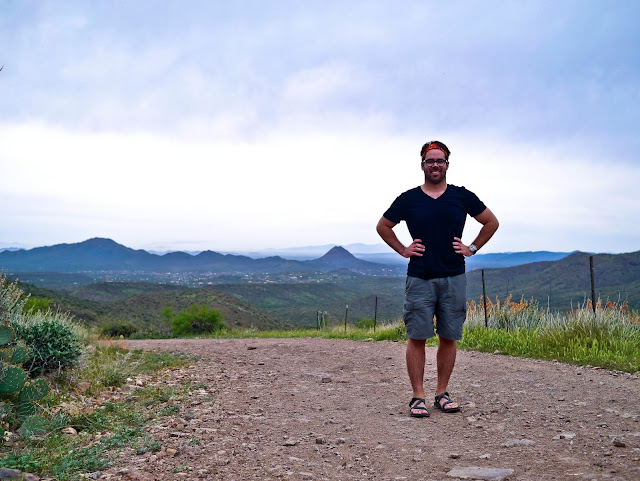 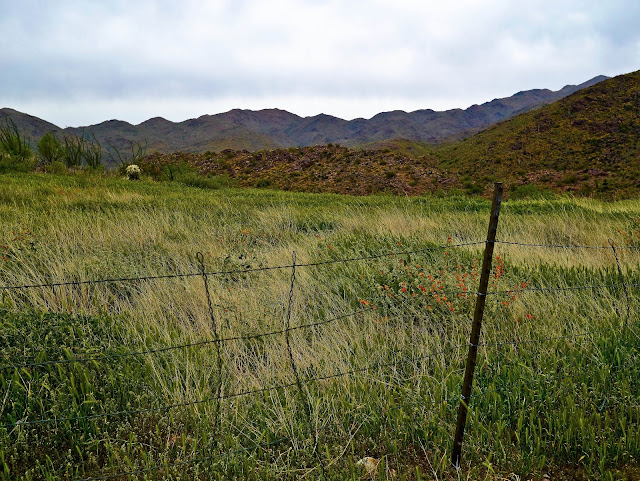 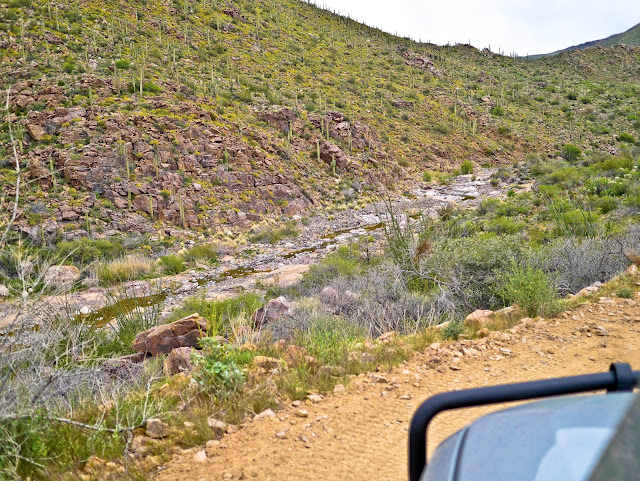 we did quite a few stream crossings. the FJ handled it like a champ. 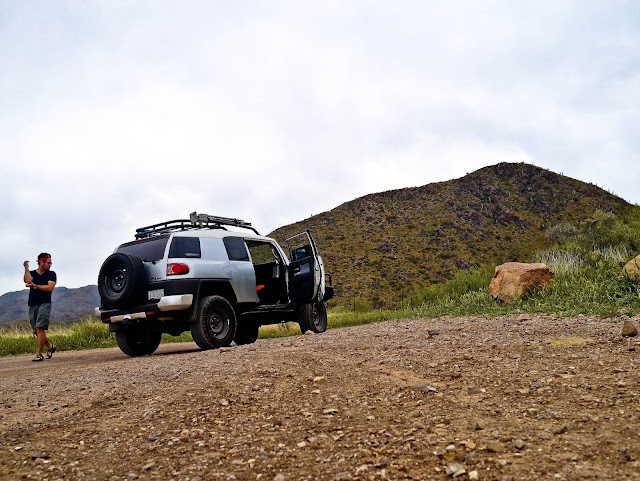 not the mini cooper. 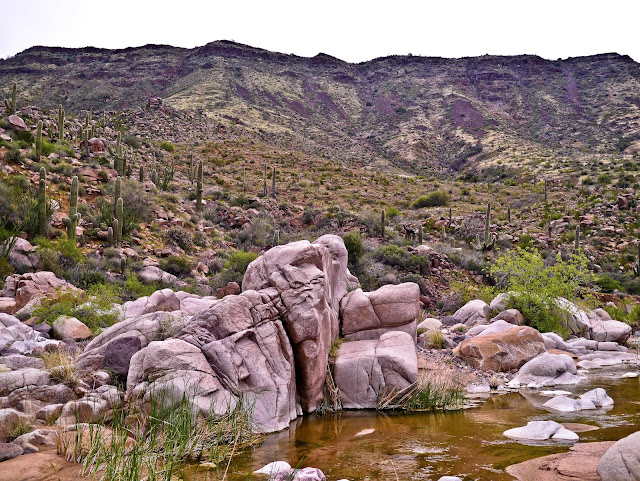 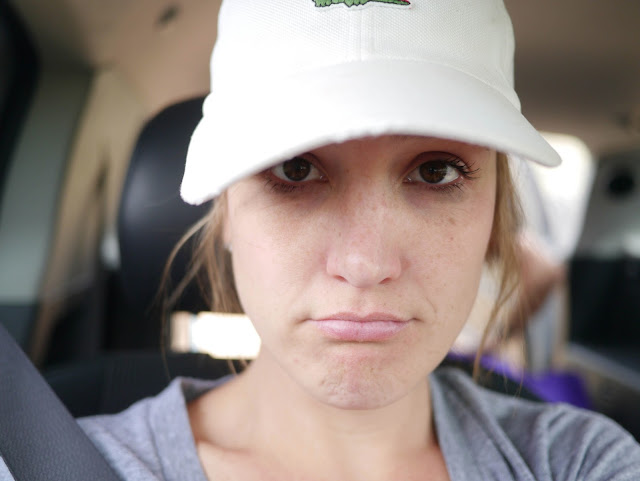 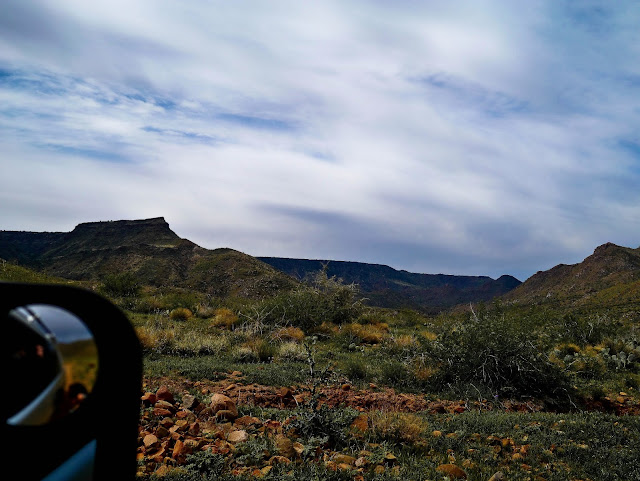 turned around and headed back to concrete – whoop! 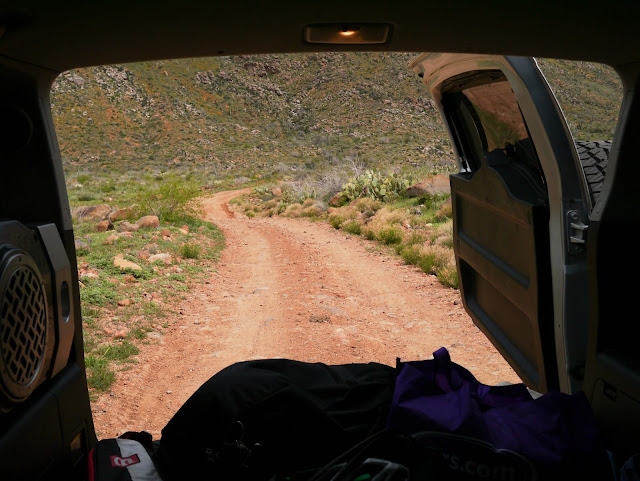 eat my dust.
here’s the good news — danny’s got a permanent passenger seat with your name on it! he was quick to remind me that people do pay to go on these types of activities. sooo, this is your official chance to do this for free! lucky you.